Rowan Murray of Ronstan Tensile Architecture explores the benefits a second skin can provide for buildings.

Over the past decade, the facade has developed from a relatively simple defensive mechanism, protecting against the external climate, to become a much more active and complex membrane. As an interface between outer and inner environments, the facade now plays a dramatically different role, and this is no more evident than in recent developments of the second-skin facade, which aim to reduce building operating costs and improve energy efficiency while maintaining a transparent building enclosure. These benefits are most evident when we look at the second skin as a response to climate change. Architecture plays an important role in mitigating climate change – the commercial building sector accounts for up to 40% of greenhouse gas emissions – but finding a way to address this in the context of real commercial and physiological demands is not easy. Second-skin facades represent one avenue for designers to address this problem by utilizing the principles of bioclimatic architecture in their façade design. Bioclimatic architecture looks for real ways to exploit climate or, more specifically, the ambient energies available in the form of light and heat: more natural light to enhance the connection between people and their surroundings and to reduce the running costs of artificial lighting; more free heating to slow down the consumption of commercial energy and to limit the environmental impact. Second skins are varied in their design, but common to all is an ability to assist with the management of outer and inner climates through varying degrees of integration with the building management systems.

At its most complex, a second-skin facade is a reversed climate facade with a ventilated air cavity between an inner sheet of insulated glass and an outer sheet of single layer glass. The distance between the two skins can be between 0.2 and 2 metres depending on the concept and system detailing. Sunscreens are usually fitted in the air cavity directly behind the outer sheet, and the cavity can be naturally ventilated utilizing the Venturi effect to supply air to inside windows that can be opened even in windy conditions. This ultimate smart facade actively anticipates the difference between outer and inner environments, becoming an essential building mechanism that works in cooperation with the building’s heating and cooling systems. For example, operable shades or louvres can be driven by building management systems to orient in accordance with the sun’s trajectory, taking into account its summer and winter solstice to maximize the benefits of solar radiation (diagram 1). Other benefits of these complex second- or doubleskin facades include improved acoustic insulation and the protection of shading devices from the outdoor environment. But this degree of integration with complex dynamic systems does come at some cost. In a bioclimatic sense, if we as building occupants can accept less comfort demands, the need for these operable systems decreases and the second skin becomes a more economically viable solution, albeit a more modest one.

In its simplest form, a second-skin façade provides a semi-permeable membrane that allows the building to breathe, while keeping out the elements. It still provides a key interface between internal and external climates, but it is not interdependent with the building’s internal climate management systems like the more complex solution above. For example, a second-skin façade could be designed to provide shelter from harsh weather, reducing the impact of rain and direct sunshine on the internal climate, but its louvres, shades or panels could be static and not form part of a linked or integrated electronic building management system. The skin would still provide control over solar radiation to aid internal climate control, and daylight illuminance and glare to ensure comfort for the occupant, but it does so without the need for expensive mechanical and electronic interfaces with the building heating and cooling systems (diagram 2).

A second-skin facade in either form is a mechanism for the increased energy efficiency of our buildings and therefore a means for the construction industry to respond to global climate change, dependence on non-renewable resources and the ever-more-expensive sources of energy, constrained resources, and threats to human health. Second skins deliver benefits in terms of the optimization of a building’s energy performance that can be measured in accordance with rating programs like LEED and the Green Star rating system here in Australia, but the real opportunity for savings in carbon emissions is revealed when we consider second-skin facades in the context of re-skinning buildings.

Faced with the challenge of housing increased populations, our planners face decisions between costly urban sprawl and the increased density of our cities. Programs such as Melbourne’s 1200 Buildings have highlighted the opportunity and set real targets for the improvement of energy performance of up to 38% to drive reductions in damaging CO2 emissions. At the same time, a growing interest in the development of retrofitting and re-skinning technologies presents a real means of enhancing the energy efficiency and livability of older buildings.

The re-skinning or retrofitting of a new façade to an old building provides the building with a new envelope. The second skin can certainly enhance the energy efficiency of the main structure, but careful consideration needs to be given to the structure directly supporting the facade to ensure that the carbon footprint associated with the support structure does not negate the benefits of the skin itself. Timber, aluminium louvres, stainless steel panels, meshes, fabric and even plants have all been used to provide protection and shelter from the elements, but invariably they have been secured on a heavy structural steel framework independent of the primary building structure. The production process for 1 tonne of steel emits 1.7 tonnes of CO2, making steel one of the most energy intensive materials at our disposal. One tonne of concrete in comparison generates between 0.8 and 1.0 tonne, and the production of glass – the material our second skins are often designed to shade – produces only 0.5 and 0.9 tonnes of CO2 emissions per tonne during manufacture. Support structures are therefore critical to the success of the energy efficiency of the second skin.

One solution lies in the application of lightweight tensile facade technology, which utilizes highly efficient tensile cables to carry the loads in place of heavy steel members. Depending on the second skin materials, cables can run either horizontally or vertically or can be coupled with cable clamps to form a tensile cable net or grid. When tensioned into place, these lightweight tensile elements with their small mass relative to their span provide stability over large areas and can span long distances. In comparison, the self weight of larger steel sections would entail the use of considerably more bracing to span the same area. By far the most important benefit of the application of tensile cables is that the self weight of the second skin/facade is minimized, but there are others.

The Q4 office building at Smales Farm Technology Park on Auckland’s north shore was recipient of the NZIA Auckland Architecture Award in 2008. Designed by Peddle Thorp Architects, the building responds to its context with views of the site and surrounding region and balances the issues of connection and context with that of environmental responsibility. Q4 involves large expanses of glass, requiring a cleverly balanced approach to thermal performance: heat loss was considered with the application of specialized glass, which limits heat transference from inside to out; heat gain was limited through passive solar design with a second skin.

The passive element came in the form of a louvre system comprised of cables and timber panels. The timber was positioned on structural cables which provide maximum strength and minimum diameter supports. The Q4 facade is a fantastic example of a tensioned facade that responds to its context with an aesthetic and effective passive solar design. 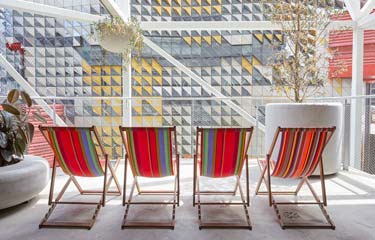